A six-car municipal police convoy skidded to a halt outside a Cape Town house, and police leaped from their cars at the offending sight: a trickle of hose water splashing onto a squat red flower.

Resident Mohammed Adhikari looked bemused and a little sheepish as police surged into his house, slapped him with an $87 fine and delivered a lecture. Watering yards with bore water is limited to one hour Tuesdays and Saturdays — and totally banned with tap water. This was a Monday.

Adhikari regarded the new lawn and garden he had just laid. He was unaware of the time limits, he said, adding that he relies mainly on his own well and buys 1.3-gallon water bottles for drinking. “I don’t think people are abusing it. Really, I don’t,” Adhikari said of water. He’s mostly right.

Earlier this year, the Cape Town government predicted the taps would run dry on April 22 — Day Zero. Only 39% of citizens were meeting conservation targets. But Cape Town appears to have narrowly averted disaster by slashing individuals’ average water use by half, an achievement that dwarfs efforts in other drought-prone regions, including California.

High-income Cape Town families have cut their average water use by 80%, according to Martine Visser, director of the Environmental Policy Research Unit at the University of Cape Town, while low-income families cut back by 40%. After city residents were restricted to just over 13 gallons per person a day, any household that blew the limit had a water restriction device attached to its pipes by authorities.

The extraordinary savings — in the heat of the Southern Hemisphere summer — put to shame how much water California used daily when its drought dragged into the summer of 2016: 109 gallons per person.

During the devastating 1996-2010 “Millennium Drought” in Brisbane, Australia, daily water use tumbled from 79 gallons per person to just 44 gallons. Impressive, but not as good as Cape Town. 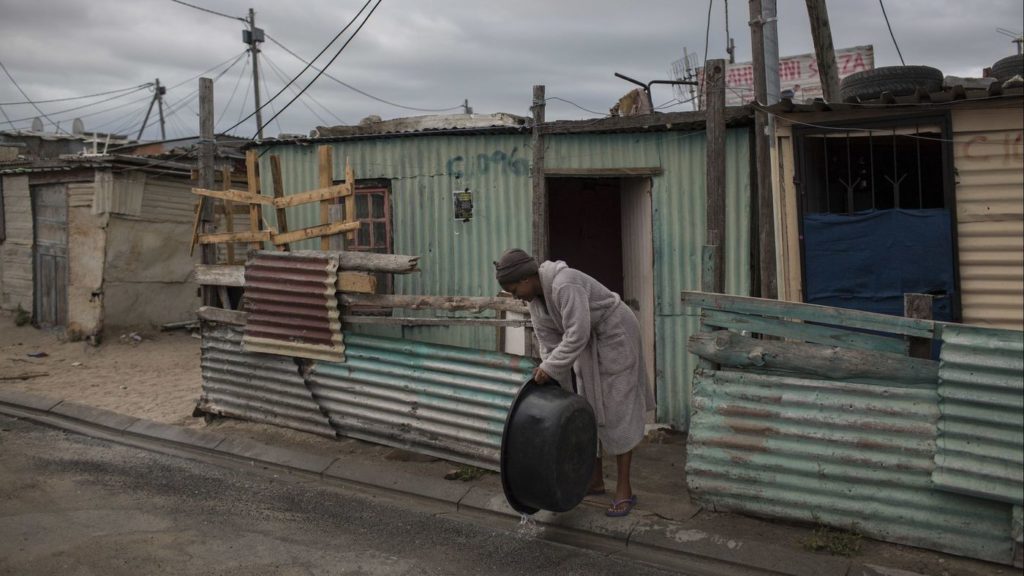 Cape Town’s wealthy cut water use by 80% while low-income earners slashed water use by 40%. Around a quarter of the population lives in informal settlements like this one, using only 4.5% of the city’s water. (Bram Janssen / Associated Press)

California, South Africa’s Western Cape and southern Australia are especially vulnerable to climate change because, with their Mediterranean climates, they depend on captured winter rainfall or snowmelt.

The drought gripping southern Africa is unprecedented. “The drought has fallen off the graphs. It’s severe,” said Cape Town Deputy Mayor Ian Nielson. “If you look at the rainfall records where there’s 100 years of records, there’s nothing like this. Scientists at the University of Cape Town have estimated it at a 1-in-400-year probability.”

Cape Town’s achievement was the result of mass effort and learning new habits, such as quick stop-and-start showers, with a bucket in the tub. Any captured water is bucketed to toilets for flushing.

Visser was part of a University of Cape Town team that tested “nudges,” or messages, to Capetonians on saving water. High-income families responded best to social recognition, while low-income families responded to reminders about lowering their water bills. A city map used green lights to highlight households that met the targets and, controversially, expose those that did not.

“It’s been phenomenal. People are proud of what they’ve achieved. The mindset has changed. I think people have been quite empowered to find that they’re capable of living with so much less water without being dramatically impacted,” Visser said. 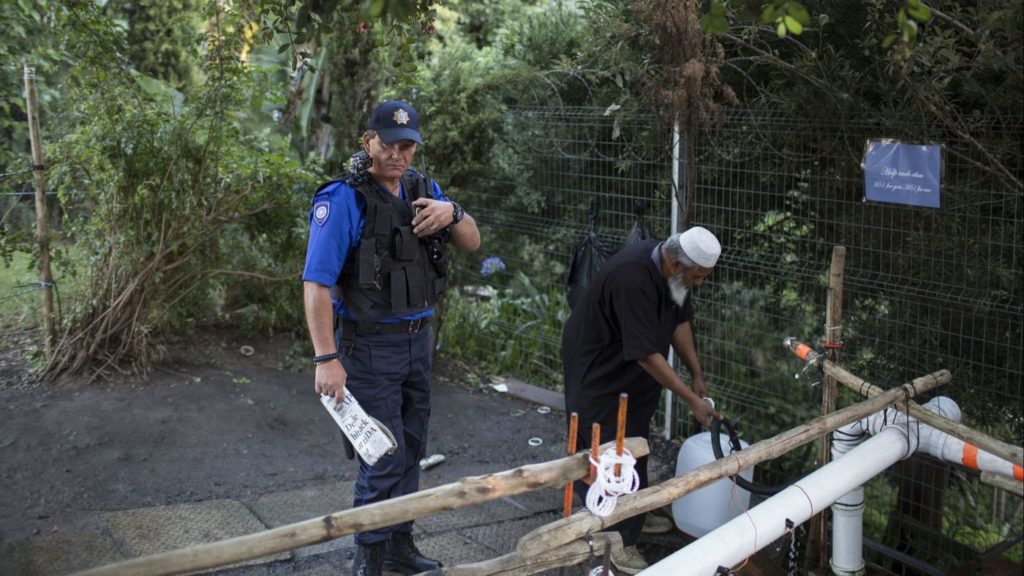 Even before the drought, the city cut losses from leaking pipes to 15% of water, compared with 37% nationally. “If we hadn’t done that, we would have run out of water by now,” Nielson said. Once the city’s six main dams dwindled, officials throttled back pipe pressure to reduce consumption.

Cape Town, source of most of the country’s wines, fruits and vegetables, is also an important tourist hub. Hotels urge tourists to keep their showers short and flush toilets “only when necessary.” Airport washrooms offer hand sanitizer instead of tap water.

Using tap water for any outdoor purpose is banned. Builders are using recycled or bore water for cement and mortar. Some restaurants have abandoned pasta and boiled vegetables, while others have switched to paper tablecloths and napkins, or reuse water from ice buckets to mop the floors. The city plans to pump stormwater into the ground to replenish aquifers.

“Everyone wants to be a superhero in the water crisis,” said Christine Colvin, Cape Town-based water expert for the World Wide Fund for Nature. “It’s not a result of any one hero. It’s a result of agriculture taking a really big hit. It’s a result of city engineers fixing leaks and reducing pressure and the willingness of 4 million Capetonians to play their part.”

The crisis has produced some proposals that go from ambitious to fanciful — such as importing water by tanker from the Congo River or towing an iceberg from the Southern Ocean.

“It’s not as outlandish as it sounds,” said Peter Johnston, climate change researcher at the University of Cape Town, of the iceberg idea. But more economical solutions are closer to home.

“The big one that’s the elephant in the room is the fact that we normally use clean water to flush our toilets,” Johnston said. “Now, we’re taking our gray water from our shower to our toilet in buckets. Imagine if that was automated. But that requires some engineering.” 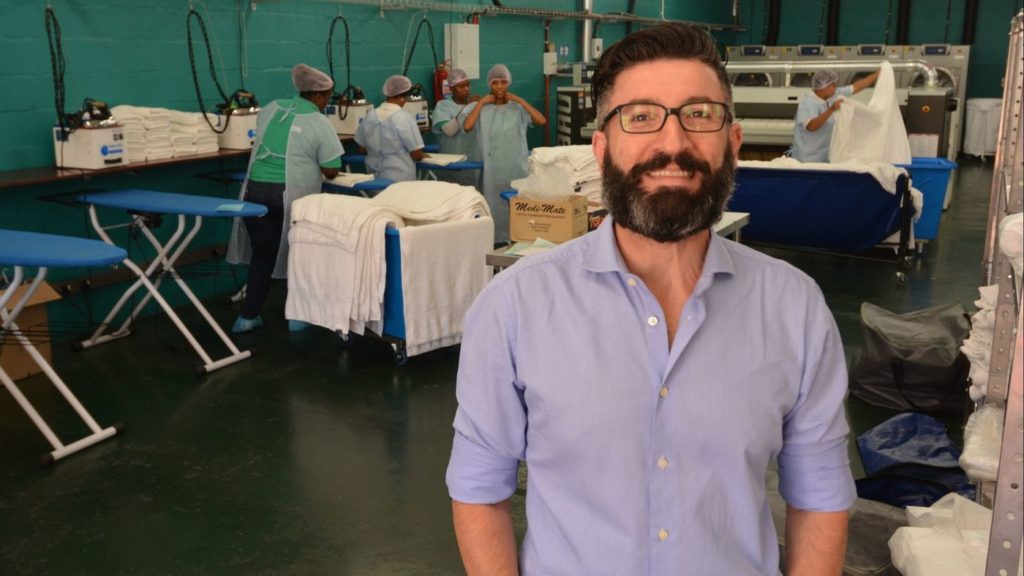 The bore water it uses looks unsuitable for washing — reddish brown, contaminated with human and animal feces. “We are using poop water, purifying it to drinking level and using it to do our laundry. My water cost is not zero, but it’s not being used at the expense of people’s drinking water,” he said.

Soares draws only 2% of his daily water needs from the bore, because he purifies his gray water. He imported Italian commercial laundry machines that use 50% less water and 30% less electricity than conventional machines. He employs only jobless people. And he has attracted water-conscious clients, including top-end hotels, gyms and a police training academy.

He originally hoped for a return on his investment in seven years. Not now. “I think we will get that in 18 months,” said Soares. Johnston said most scientific projections forecast a drier and hotter climate for Cape Town in future decades, forcing the city to focus not just on reducing demand but alternative water sources.

Cape Town avoided the mistake made during Australia’s Millennium Drought, when cities spent billions on massive desalination plants that had to be mothballed at enormous expense when rains finally came.

Cape Town is building three small temporary desalination plants but its main focus is drilling hundreds of bore holes. The risk: guzzling too much groundwater, as happened in California.

“A lot of people are digging bore holes into that water now, but we don’t know how much water they’re taking out and how many bore holes there are because they’re not being monitored,” Johnston said.

California approved legislation in 2014 to prevent unsustainable groundwater use. In areas where groundwater has been severely depleted, local agencies have until 2020 to draft and begin implementing plans to manage water better.

“It’s a bit of a case of suck it and see. We have to be brave enough to switch it off if the environmental impact is unacceptable,” she said.

Recycled water, including purified effluent, offers a cheaper source than desalination, but many governments are reluctant to embrace this. Purified effluent is used for drinking in Singapore and Namibia, but that would be a hard sell here.

“There’s just a yuck factor, so there’s a certain amount of resistance to that,” said Johnston, who believes that changing the perception of recycled water will be key to the region’s survival. Cape Town can’t afford to “see it as something that is dirty and must be thrown away,” he said. “It’s dirty, but it can be cleaned.”

For now, Cape Town residents are nervously awaiting the fall and winter. If rain doesn’t come, Day Zero may loom in Cape Town this year after all.

The 10 best places for high tea in Cape Town

A road map to the magnificent wine estates...

Cape Town restaurants with a view

Experience the wonder of creativity at the 2020...

10 reasons to make Cape Town your next...